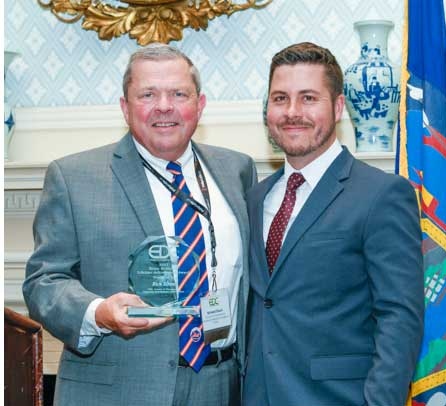 COOPERSTOWN, N.Y.:— Richard Dixon, Chief Financial Officer with the County of Chautauqua Industrial Development Agency (CCIDA), was honored with the Brian T. McMahon Lifetime Achievement Award for excellence in Community-Based Economic Development at the 2022 NYS Economic Development Council (NYSEDC) Awards Banquet, held May 25, at the Otesaga Hotel in Cooperstown, NY.  The award was presented in recognition of a lifetime of service in the economic development field.

Dixon was recognized as an accomplished economic developer due to his track-record and extensive financial and operations management experience.

“Rich has served as a mentor, leader, and friend to countless economic developers across New York State, leaving a lasting mark on the NYSEDC members and the Chautauqua County Community,” said Silva.

Dixon began his tenure as Chief Financial Officer with the County of Chautauqua Industrial Development Agency (CCIDA) in July of 2006. In that time, he played a major role in all economic development activities in Chautauqua County as a behind-the-scenes orchestrator of several high-impact deals that have had reoccurring impacts for the local economy.

“His leadership and dedication are directly related to the creation and retention of thousands of jobs and the investment of hundreds of millions of private dollars in Chautauqua County,” said Mark Geise, CCIDA CEO.
“In addition, his compassion and friendship are also unmatched and have created a culture of excellence within our organization,” added Geise.

CCIDA Board Chairman Mike Metzger echoed Geise, “Rich’s is the ultimate professional and his passion and dedication for our business community is equally matched by the community’s love for him and his easy-going personality.”

Geise and Metzger recalled several projects in which Rich’s facilitation of technical assistance and financial incentives helped companies save jobs, grow, and relocate in Chautauqua County.

“From achieving an A+ risk rating with our loan portfolio, to securing a $10.5 million EDA Grant, to developing our industrial parks, to saving companies like SKF and assisting those like Southern Tier Brewing and Maplevale Farms, Rich has proved effective at every turn,” said Geise.

After receiving the award, Dixon shared a story about the day he turned 16 years old. His dad picked him up from playing baseball, and instead of taking him for his drivers permit, they went to the high school to get his working papers. He explained, “The next day, I’m at Jamestown Metal Products where they made sheet metal cabinets for submarines, and for battle ships. You name it, they made it. I immediately fell in love with manufacturing. For the next six summers, I toiled away in Factories in Jamestown and that is where I got the bug.”

He concluded his award acceptance with, “I would like to dedicate this award to all the men and women of Chautauqua County, who work 7 to 3, 3 to 11, and 11 to 7, and they make fantastic products!”

NYSEDC’s Lifetime Achievement Award is given to an individual who has demonstrated consistent, exemplary performance in the economic development profession, leading the execution of projects that have significant impact on revitalizing communities, and playing a major role in shaping and improving the practice of economic development in New York State. Recipients are given a lifelong membership in the NYSEDC.

Dixon received a Bachelor’s in Business Administration with a concentration in Finance from the State University of New York at Fredonia in 1985. Before joining the CCIDA, he had a successful and dynamic career in human resources, economic development, and finance, with stints working at Chautauqua Works, Chautauqua Opportunities, Inc., Chautauqua County, and the Private Industry Council. Rich and his wife Carol are lifelong residents of the City of Jamestown. They have two grown daughters, Emilee and Sarah, and two grandchildren, Alexandra and William.